September is the start of the holiday months. Beginning with the “Harvest Festival” and ending with the  “Love is in the Air” event, WoW is nonstop celebration. Add the release of an expansion and a new reason to become a noob all over again, and you have yourself a volatile AH. The marketplace will become a very challenging place for any entrepreneur looking to make a dent in the AH.

The good news is that crafters are in high demand and so are specialized farmers. While farming can be a bit more challenging with other players hogging all the nodes and mobs, it is still a much needed profession. A specialized farmer, he who hunts down specific items (silk for example), can create a better cash flow in a season where higher populations can bring down the price of a core items by flooding the market. Let’s face it, a lot of new players don’t know any better.

It seems weird, I know, but WoW AH in times of high population can produce High Demand items at Low Prices. What happens here is that there are three kinds of WoW players. The first is the noob. He only works as he see it, undercutting everything, sometimes even flooding the market, just to be sure he sold his items. And they will sell everything not nailed down. Second is the lowbie auctioneer. With the auctioneer addon, a many like it, a player can gleam a quick survey of his products value based on average of what it reads from the AH over a certain amount of time. What players don’t do is look for how much the value has dropped. Secondly, these players sell in bulk and don’t watch what they are pricing at, due to the auto posting button. The noobs will flood the market undercutting the competition and bring the average down for the lowbie auctioneers, who will just add to the problem by auto posting.

The third is players like you who know how to adjust the market price, when to post, and by how much.

More on that later.

What I want to do right now is switch gears and talk about some crafting opportunities that you can use for the holiday events. Farmers don’t forget to aid those crafters the best you can.

First up is the Harvest Festival, which is nothing more than the herald of more events to come. Nothing needs to be farmed for this, because there’s only one quest to do, and all you have to do is show up. However, from this point on, you will notice a bit more stable population fluxes on your server. Now that school is back in session, days are getting colder, and American Football is back on TV (US Servers); life on WoW is starting to get more structured. If you want to farm, do so when the kids are at school and the workings stiffs are at work (or when everyone is sleeping). Do your homework and find out when the server guilds show up so, as a crafter, you will know what nights are your most profitable.

Pirate’s day is on the 19th of September. Again, no quests, but expect a spike a causal gamers to head to booty bay. On this day forget your inner pirate and get in touch with your inner NY Street Hot Dog Vendor; head to the action and start peddling your wares. Booty Bay will be hopping from dusk to dawn, so that a great place to set up shop for the day and offer portals rides, jewel cutting, and other custom crafting services.

The next day is Brewfest, so head up to Ironforger/Orgrimmar break out that hot dog stand yet again. Another event where farmers sit on the bench while the crafters do their business. Mages, people will need a trip to Dalaran to complete the Disturbing the Peace achievement. Since everyone here is eating and drinking, bring food and drink (several different types) to help them earn the Tastes Like Chicken and It’s Happy Hour Somewhere achievements. 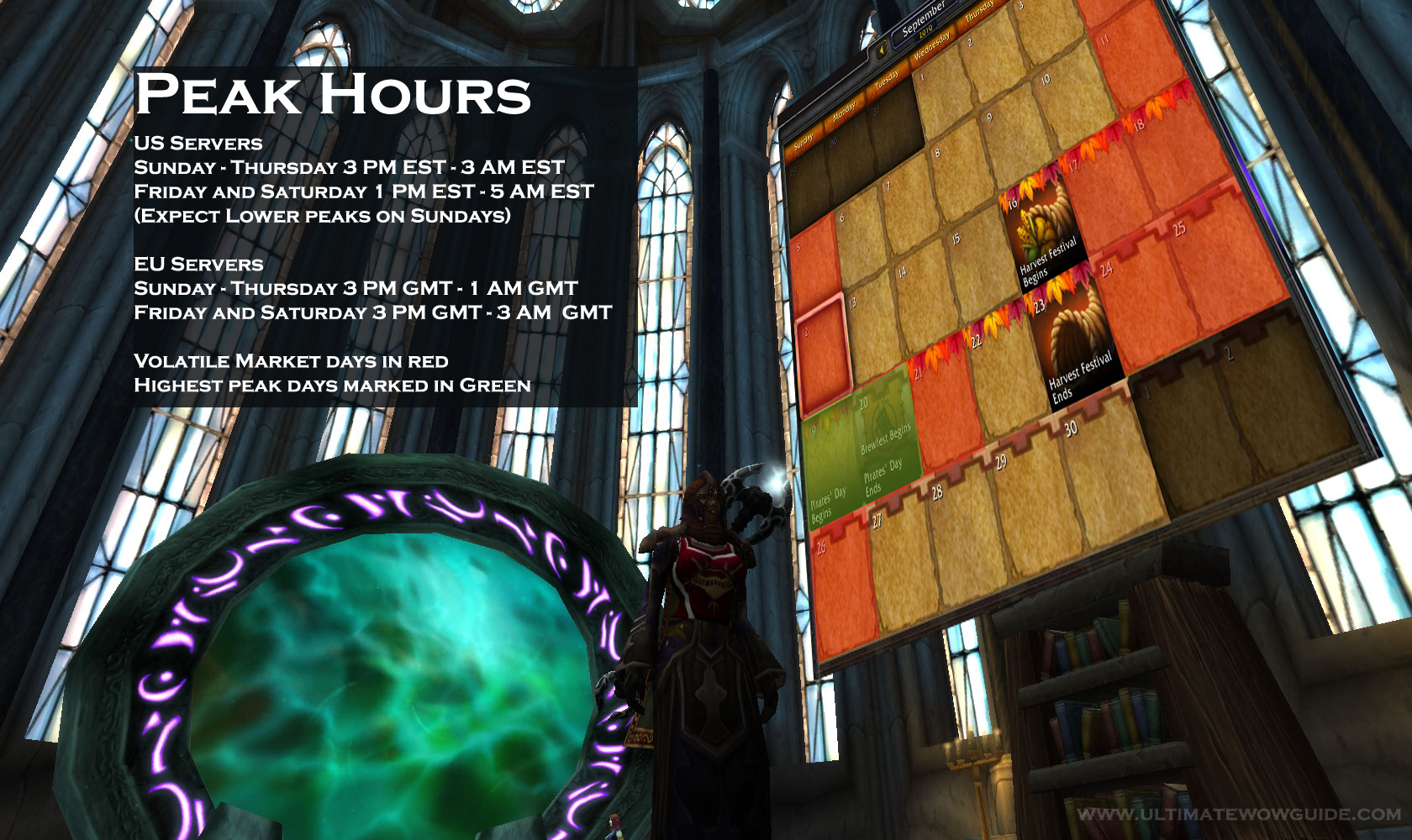