A major feature in the WoD expansion is the Garrison. In the expansion, you will get a Garrison Hub that you build in the level 90 zone which also serve as your faction hub in Draenor. Then you will also get Garrison Outposts for the other four zones.

Garrison Outpost do not work like your Garrison Hub. You can’t create and level up additional buildings. Instead you get a special zone wide perk and different quest chains which also reward different followers. 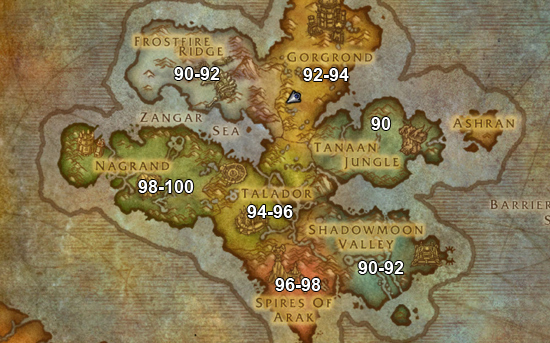 You will be given the option to select the type of Garrison Outpost after several zone introductory quests like the example below.

Your choice is actually very important if you want it to help you with leveling and I though I would share my opinion on which option is best when you venture into Draenor for the first time.

Lets compare the abilities and choose a winner for each zone…

You get the choice to build either Logging Camp / Lumber Yard vs Sparring Ring / Savage Fight Club  outpost.

Summon Mechashredder 5000, which give you three special abilities…

This outpost will give the ability

Champion’s Honor which summons a random champion to fight with you for 1 min then give you a 5 mins buff which could last longer depending on the number of enemies you kill with the champion present.[/two_columns_2]

Winner:
Logging Camp / Lumber Yard is the winner for leveling because the

Summon Mechashredder 5000 will allow you to tank and deal very high damage which is great for taking down Rare Elites or clearing packs of NPCs.  The best part is that you also get

Rocket Boost which will allow you to fly for short duration. You can use it to go over mountains or unreachable areas since you can’t fly at all in Draenor.

Champion’s Honor in my opinion is inferior because the champion summon doesn’t seem to deal as much damage as the Shredder. I’m sure in the release both perks will be balanced in terms of damage but I would still choose Lumber Yard to get the

Rocket Boost from the Shredder.

You get the choice to build either Wrynn Artillery Tower vs Arcane Sanctum outpost.

The zone-wide Talador perk is

Your Arcane Sanctum perk is

Guardian Orb: Summons a Guardian Orb at your location that electrocutes enemies within 15 yards for 9600 to 14400 damage every 2 sec for 30 sec.[/two_columns_2]

Winner:
Both outposts provide similar type of abilities and both very powerful but I would pick Wrynn Artillery Tower because

Artillery Strike comes with 3 charges.  This good because this allow you to use 1 charge so you can use it more frequently or use all 3 charges at the same time for a ton of burst damage.

You get the choice to build either Stoktron Brewery / Hearthfire Tavern vs Smuggler’s Den outpost.

Home Away from Home, a teleport to your Inn in Spires and 20% boosted XP in Spires.[/two_columns_1][two_columns_2]

Once every 10 minutes, a vendor can be summoned who has a chance to sell a variety of interesting wares

Home Away from Home does seems like an obvious choice for the 20% more XP for the zone but the passive XP buff becomes useless once you reach level 100. Blizzard will likely add new quest or objectives for each zone as there are some areas in the each zones with level 100 npcs so it’s likely that you will continue to use the Perks after you reach level 100.

Ravenlord’s Talon which will help you quest faster. You can also purchase an extra follower available only from

Home Away from Home until you reach level 100 then you can switch the outpost to Smuggler’s Den for 10,000g. But I probably rather keep the gold and just stick with Smuggler’s Den.

You get the choice to build either Rangari Corral  vs Telarri Tankworks outpost.

Frostwolf War Wolf. This is mount allows you to use all your abilities while mounted. You can also loot while mounted as well so it pretty much a zone wide 100% speed buff.

You can summon a

Wor’var Demolisher with the following abilities:

Winner:
While the tank provide a ton of damage, Rangari Corral for the mounted combat is the better choice. Mounted combat is a unique experience and extremely fun while at the same time I think you will level much faster with it as well since you never have to get off your mount (except indoor areas).

The tank is also on a 10 mins cooldown while the mount has no cooldown at all.

Well I hope you find this post helpful and help you make the right choice when you level for the first time in Draenor.

41 replies to "How to Choose Garrison Outpost for Leveling"