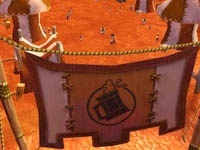 This year the event was slightly delayed to allow people to get a start on Mists of Pandaria. It requires level 89 for completion of all of the event.Ceremonial Keg-Tapping
Each day at 6:15 AM and 6:15 PM server time, High Tinker Mekkatorque (Ironforge) and Vol’jin (Orgrimmar) come out to the Brewfest grounds for a brief Tapping of the Keg ceremony. Everyone who witnesses the ceremony will receive a buff that increases experience by 10% for two hour.
don’t forget to grab the Brewfest Enthusiast buff at 6:15 AM and 6:15 PM server time outside of Ironforge and Orgrimmar at the Tapping of the Keg ceremony.In addition, there are two new items from vendors: