So you’ve probably heard that instance leveling is the best and fastest way to level your World of Warcraft characters, but you could be missing out an important part of that speed.  Instance quests are a great way to add on the experience you earn and help you level your toons even faster than instance leveling alone. 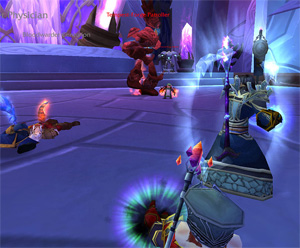 The Benefits of Instance Quests

Every time you complete a quest, you get experience, in addition to possible gear or other bonuses.  However, instance quests will give you twice the experience of solo quests, which means you only have to complete two instance quests to get the same amount of experience you’ll get from four solo quests.  This means that each and every level will go by faster than you can imagine.

Instance quests are also much easier to complete than solo quests because you don’t have to do them alone.  This aspect also makes them a lot more fun.  Chances are, if you have other level 85 characters and are now leveling a new toon, then you’ll discover new quests that you just skipped over before because you had to have a group to complete them.

How to Find the Instance Quests

In most cases, instance quests will be available in the vicinity of the entrance to the instance.  For example, when you reach level 60 and move out to Outlands, you should be able to find several quests that need to be completed inside of Hellfire Ramparts.  Just start by looking around the towns that are near the entrance to Hellfire Ramparts.  However, remember not to stray into towns held by the opposing faction.  All instance quests that are available to you will be in a town that’s either contested territory or held by your faction.