Daily quests are an important part of World of Warcraft, especially if you have any of the professions that require daily quests.  Jewel crafting, cooking, and fishing all have daily quests for you to do, and there are important benefits from completing these daily quests each day. 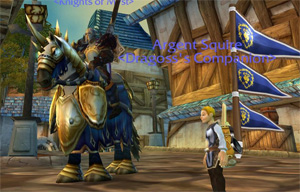 The daily quests for cooking are the only way to learn certain recipes, including the recipe for fish feast, which is the one everyone always brings on raids.  The fish feast increases attack power and spell power, which means it has a beneficial aspect for all raid members.  There are daily quests for cooking in both Shattrath and Dalaran.  The Shattrath dailies can drop certain recipes from the Barrel of Fish or Crate of Meat, which are given as rewards for the daily quests.  The Dalaran cooking dailies reward you with 1-3 Dalaran Cooking Awards or some extra spices.  The Dalaran Cooking Awards are used to purchase additional recipes.  The Small Spice Bag reward also has a chance to drop additional rare recipes.

Another important aspect of running daily quests for jewel crafting is reputation.  There are several factions throughout the game that offer epic and rare gem designs.  These designs can only be purchased by characters that have enough reputation with them.  Running daily quests for these factions will help earn enough experience for jewel crafters to become eligible to purchase these epic and rare designs.  Another way to earn reputation is by purchasing a tabard from the faction you want to earn reputation with.  Just wear the tabard while you’re running dungeons, and you’ll earn reputation for that faction from each kill.  However, you must be at least friendly with the faction before you are eligible to purchase the tabard from it.