Do you ever wonder how some players seem to earn three, four, or more levels per day while leveling their characters on World of Warcraft?  Of course the answer lies in instance leveling with the dungeon finder, but the answer probably doesn’t stop there.  It’s quite likely that these players have discovered the benefits of instance quests. 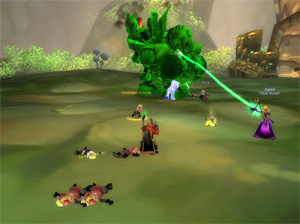 Instance Quests: Not to be Skipped Anymore

Players who have leveled on their own in the past know that the instance quests are always the most difficult.  Not only do you have to find four other plays to group up with, but the quests themselves are just too difficult to do alone.  Most solo levelers just got into the habit of skilling the quests that are located inside of instances because they either didn’t have enough people to run the instances or because the quests themselves were just too hard.  However, the dungeon finder solves both of these problems by uniting players across several servers.  It means you can queue for an instance at any time of day, even when it’s not during your server’s peak time.

The dungeon finder also takes all the guesswork out of putting your own group together.  It forces you to have one tank, one healer, and three DPS.  This is the perfect formula, and when you have several levels of toons all playing together, then you’re sure to get a group that’s varied enough to make doing the quests a lot easier.

Instance Quests are Easier than they Sound

Of course all this time we’ve been talking about how much more difficult the dungeon quests are, but on some levels, that actually may not be true.  In some cases you will get a group that just can’t complete an instance, let alone the quests inside of it, but in others, you’ll luck out and get a toon that’s at the upper edge of the level range for the instance you’re in.  This will make doing the quests inside the instance a whole lot easier.  After all, isn’t it easier to do the difficult quests with the help of four other people?