One of the most common reasons for WoW players to complete daily quests is to earn reputation with the various WoW factions.  Reputation has a wide span, from hated and hostile all the way up to revered and exalted.  Obviously you can’t buy from factions you are hated or hostile with.  On the other hand, many WoW players don’t know that there are some vital bonuses that can be purchased from factions you are exalted with.  Here’s a quick daily quest guide for the reputations most classes and races will find to be the most helpful. 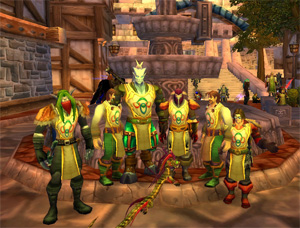 The Sons of Hodir daily quests are pretty average in difficulty.  They involve killing a certain number of specific type of creature or collecting certain things from a specific area.  Also don’t forget you can purchase reputation with the Sons of Hodir after you reach friendly status with them.  You’ll gain reputation for every 10 Relics of Hodir you turn in to the Sons of Hodir Quartermaster.  He will appear with a blue question mark above his head if you have enough to turn in for reputation.  Also some players do sell the Relics of Hodir on the auction house, so it is possible to buy much of your way to exalted status if you have enough gold.

Tanks will definitely want to work on their reputation with the Argent Crusade.  This is because of the Arcanum of the Stalwart Protector, which is a great enchantment for a head slot item.  Tailors also should raise their reputation with the Argent Crusade so they can learn the pattern for Brilliant Spellthread, which is a very common leg enchantment for healers and casters.