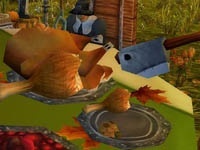 Pilgrim’s Bounty is here and it’s time to reflect on your journeys across Azeroth, share plentiful food, and exchange stories with friends. Throughout this holiday, you can partake in feasts near major towns by sitting at a bountiful table and enjoying the foods you find there.

Due to its focus on food, this holiday is especially well-known for being a quick and easy way to level up cooking. By purchasing a

This holiday lasts from November 20 at 4:00 AM to November 26 4:00 AM. We’ll be updating again on Sunday if anything has changed for this year’s holiday. 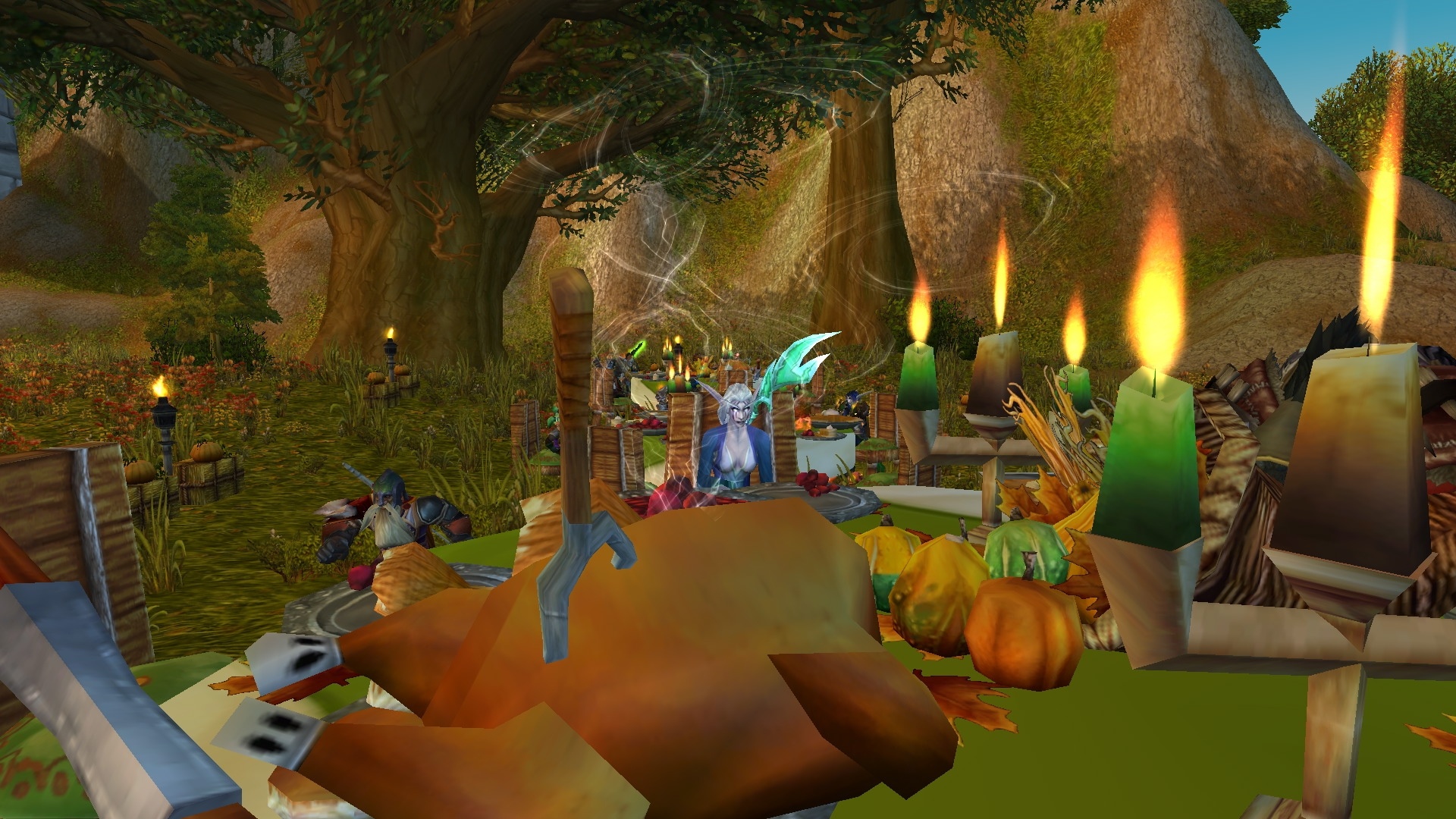 Bountiful tables can be found at the following locations:

At any of these locations, you will find that bountiful tables have been loaded with food. The tables located in major cities will be surrounded by vendors, cooking trainers, and questgivers while the ones located in minor towns will have only a hostess to greet you. You can sit and eat at any table–even those located in the opposing faction’s city/town. In fact, there’s even an achievement for doing just that!

A bountiful table features five different chairs, one for each different food that is available in that spot. Each chair is labeled for the associated food, and you will be able to eat/pass as much of it as possible for as long as you are seated. Each table features The Cranberry Chair, The Pie Chair, The Sweet Potato Chair, The Stuffing Chair, and (of course) The Turkey Chair. Unlike normal chairs, the bountiful table’s chairs function similar to vehicles and feature their own unique abilities that will replace your main action bar upon being seated.

Players will be given options to eat or pass the delicious foods provided at their seat. These abilities are necessary not only for eating to obtain the respective food’s buff (you must eat five helpings of a single food to gain its buff), but also to pass the foods required for

Sharing is Caring and to accidentally “throw” the food required for

If you eat five helpings of each of the available foods at a bountiful table, you will gain the

The Spirit of Sharing buff which grants a 10% increase in reputation gain for an hour, and can be regained simply by visiting a table and sampling all five foods again. If seated players pass food to each other, obtaining this buff shouldn’t take long at all–so don’t forget to share! 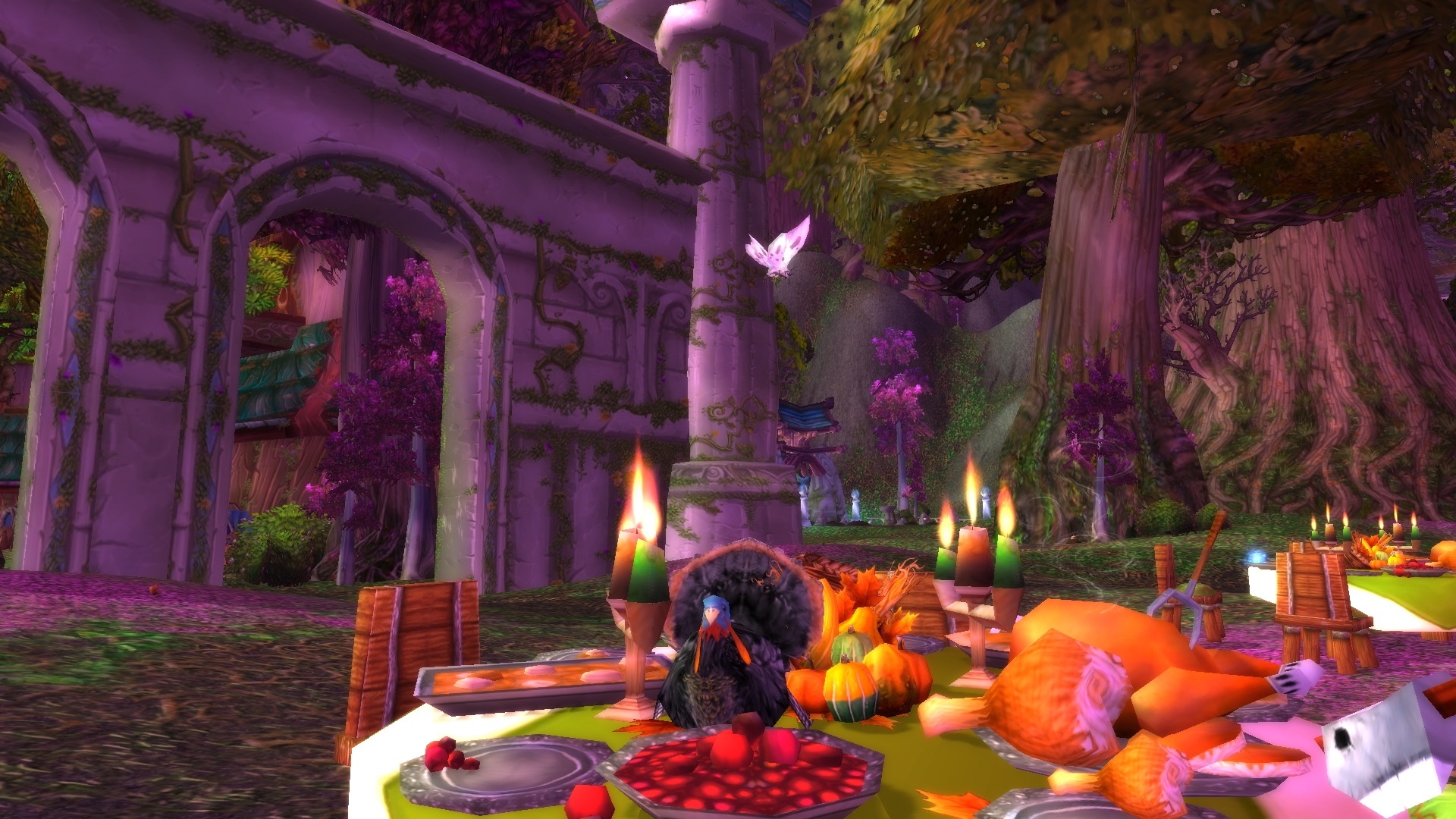 The ingredients required for cooking the various Pilgrim’s Bounty recipes are available only from special seasonal vendors or from mobs that will not spawn outside of the season.

Chef de Cuisine). If you want a guide that focuses specifically on the related recipe achievements, user Patrick3876 made an excellent one for Wowhead!

The following items can be purchased from seasonal vendors and used to cook the new recipes, and some can only be purchased in a specific zone (see item tooltips):

In addition to those ingredients, Pilgrim’s Bounty Vendors will also sell:

Upon completing the quest chain ending with

Slow-roasted Turkey (Alliance version), you will receive a

Turkey Caller. This fun little item can be used to call a Wild Turkey to your side (which can then be killed for

Wild Turkey). This is not to be confused with the non-combat pet you can obtain by completing all of the Pilgrim’s Bounty achievements and will expire when the event has ended.

Turkey Shooter to transform each different race of rogue for

You will need to complete at least ten daily quests in order to obtain enough items to complete various achievements (a Pilgrim Hat, your choice of chestpiece, and the 8

Turkey Shooter). The following items are awarded from the Pilgrim’s Bounty daily quests: 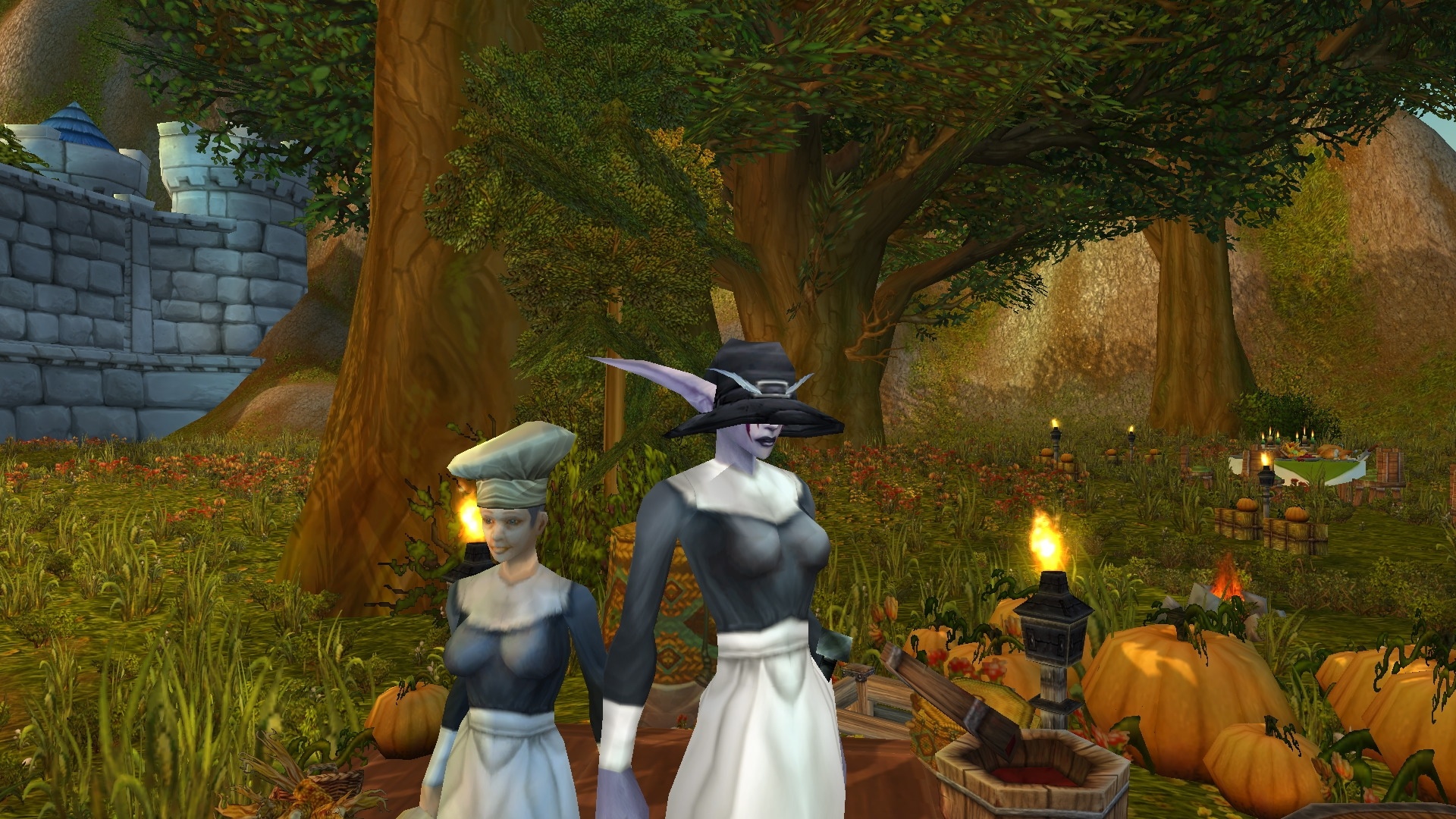 With the main focus of the Pilgrim’s Bounty event being food, you had better believe there’s new

Cooking recipes! Seasonal recipes have been added and players can purchase a

Bountiful Cookbook (Alliance version) containing all five of their faction’s recipes for a mere 1 from any Pilgrim’s Bounty Vendor!

It is worth mentioning that learning and cooking these seasonal recipes provides one of the easiest and fastest methods of leveling cooking fromat least 1 – 300 skill using only seasonal, vendor-purchased ingredients, so if your character has no cooking skill now is the perfect time to start!

New Pilgrim’s Bounty vendors have been added that sell most of the reagents required for cooking these recipes. Certain specific ingredients can only be purchased at their respective cities, for example

Mulgore Sweet Potato can only be purchased in Mulgore, nearThunder Bluff. The only item you will have to go out and farm for is the

Wild Turkey, which will require traveling out to either Tirisfal Glades or Elwynn Forest and killing Wild Turkey. Thankfully, the

Wild Turkey is a 100% drop and these critters don’t put up much of a fight.

It is also worth mentioning that one of the recipes (

Spice Bread, which is created by another cooking recipe unrelated to the holiday. This recipe,

Spice Bread, can be trained from pretty much any Cooking Trainer and requires only 1 point in

Cooking skill, making it a great leveling recipe as well. 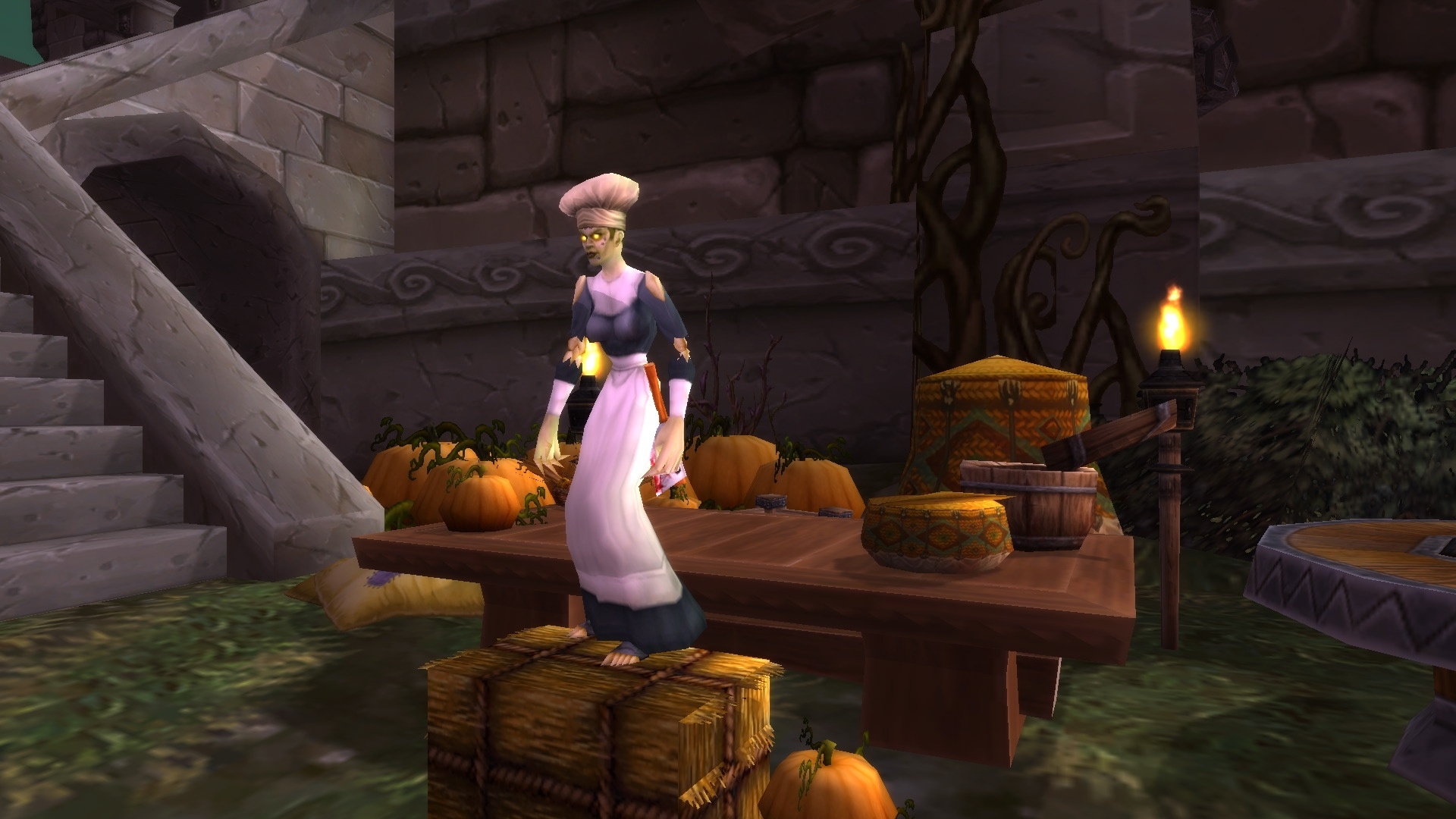 Pilgrim’s Bounty features a number of new cooking-oriented quests, most of which have daily quest versions as well.

Cooking skill in order to be able to cook all of the new seasonal recipes, though the recipes have varying skill levels so if you are not interested in completing everything there will definitely be a recipe you will be able to cook for at least one daily quest, provided you have any Cooking skill at all.

The recipes required for these quests can be learned from a Pilgrim’s Bounty Cooking Trainer located near the major cities’ Bountiful Tables. 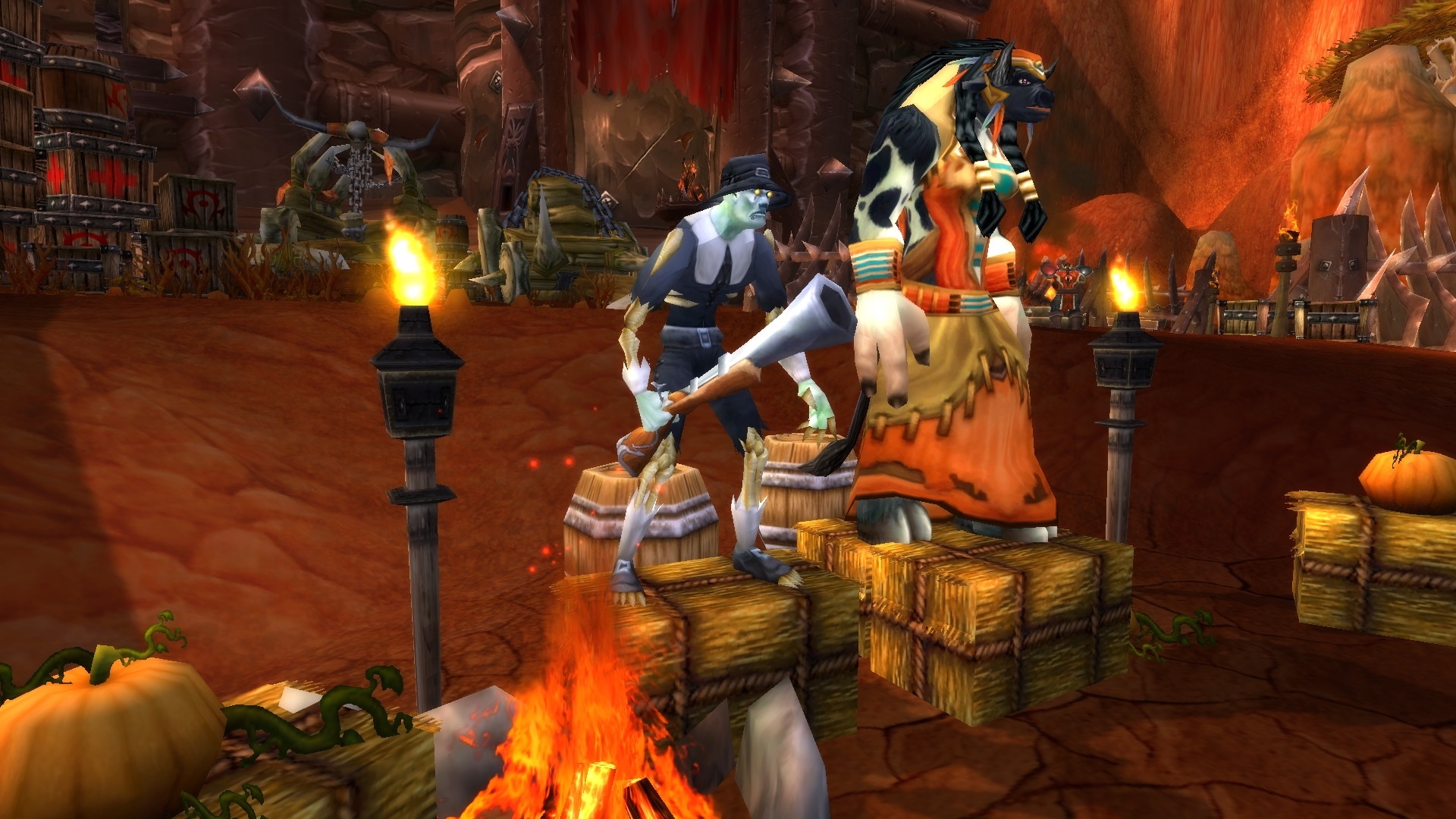 Pilgrim’s Bounty features nine unique achievements that can be earned! While it is definitely worth noting that the

What A Long, Strange Trip It’s Been, this achievement awards not only a new player title but a non-combat pet as well!

That’s right, complete all of the Pilgrim’s Bounty achievements and your character will gain the title ‘the Pilgrim’ and receive a

Plump Turkeypet! Unlike that bony little brat from Day of the Dead, this is a permanent pet.