TourGuide has been back online for 4 days which was about the same time we released our new addon, and yet after all the controversy we didn’t hear any official announcement from Zygor or Tekkub, it is as if the issue is being “swept under the rug” so we can all forget it ever happened.

After 3 weeks of on going lawyer discussions I now feel comfortable to disclose the information below.

UltimateWoWGuide.com wish to take a stand that we were within our rights to distribute TourGuide until 18th Feb 2010, any other public statements stating otherwise is false and defamatory against our business for the following reasons.

This proves that we are within our rights to distribute TourGuide for commercial use and this also proves that Tekkub’s statements on his website and statement made by Zygor that I never had Tekkub permission to sell, or distribute the TourGuide addon is clearly false and there is an alterior motive as to why they would say that.

2. We also note that Tekkub had published the source code of TourGuide on http://www.github.com. One of the terms and conditions of opening an account with GitHub.com is that by setting the user’s repositories to be viewed publicly, the user agrees to allow others to use that user’s repositories to take a copy of source codes from software programs and develop it independently of that software (‘forking’). A copy of the terms and conditions for GitHub.com can be found at http://help.github.com/terms/.

Tekkub claimed that by “setting a repo to be viewed publicly is like packaging an addon in plaintext files… anyone can view it because there is no mechanism available to prevent them from doing so.”

However this statement is incorrect GitHub.com does have an option to set your repositories as private which is recommended by GitHub if you software proprietary. It is also clearly stated on GitHub and if you chose your repositories to be viewed by anyone (refer to screenshot below), you also declare that is an open source project (see section 1.) And the term forking is commonly known to the programming community here.

I forked Tekkub’s TourGuide repo from github to my own github account in January 2009.  If “forking” wasn’t allowed and if TourGuide is not “open source”, the wrong message is clearly sent to the public by hosting it on as a public repositories without any form of license. There are options in GitHub to protect your software to which Tekkub chose not to use.

3. On 3 April 2009 Tekkub was upset regarding the “forking” of TourGuide, I took action with removal of the public link and clearly stated I was still distributing it in my members area. I offered a solution such as licensing, and modification of TourGuide, these options were a possibility and I was under the understanding that these options were being considered.

We complied by removing the link and suggesting a solution and we were still within our rights to continue distributing as we still have permission, if our final email was unacceptable to Tekkub, then he should clearly state it. Which he didn’t and he admitted “chose not to pursue it“.

4. On 12 December 2009 Tekkub continued to take our donations, and also help us further in modifying by providing a code for TourGuide for our distribution in Dec 09.

This proves that there was no problem with us modifying and distributing the guide.

5. Tekkub also encouraged the renaming of TourGuide “In short, you f*ck with it, find a new name for it.” which was the issue that he had with us.

This further proves that Tekkub is not opposed to people modifying and distributing TourGuide.

6. Even after Zygor’s acquisition of TourGuide, Tekkub is not opposed to wow-pro distributing TourGuide but completely against to what we have done when it is the same thing.  Arguments that this is because wow-pro is not a commercial or non profit website is invalid, the large amount of free traffic that wow-pro received is helped by distributing tourguide which adds to their profit of banner advertising.

Again this further proves Tekkub is not opposed to people modifying and distributing TourGuide for commercial use.

Our donation to Tekkub was only $500 and I admit it was far from enough, but the fact remains that it was a donation, something we didn’t have to give and our donation made up almost 50% of money that Tekkub received for the development of TourGuide as a public addon. We were ready to take it to the next level with licensing long before Zygor however Tekkub showed no interest.

On January 2010 I even contacted Tekkub to offer him a monthly sponsorship program to continue his development for TourGuide as a free addon for everyone to use. Tekkub never responded because obviously it was too late as he already sold it to Zygor.

As far as I know we were Tekkub’s #1 supporter, over the year we have also contributed to TourGuide by suggesting features and submitting bugs. I don’t think it was fair for me and others who have donated and contributed in anyway for the public project of TourGuide only to be shut out completely and then accused of copyright infringement in public.

I don’t know why Tekkub would state incorrect statements against us, I  did contact Tekkub to try to get more closure,  however he simply states he does not have the liberty to comment. I have also forwarded him this statement for him to correct or comment before posting publicly on this blog,  he didn’t reply.

Zygor Intention To File a $150,000 Lawsuit Against UltimateWoWGuide

1. On 18th Feb 2010, after Tekkub’s confirmation of Zygor’s acquisition of TourGuide on his website tekkub.net, we promptly stopped selling our leveling guide and complied with Zygor’s demands, as this was the only proof that we found that Zygor have acquired the rights to TourGuide.

2. On 22nd Feb 2010, I received a follow up letter from a Lawyer representing Zygor Guides LLC of their intention to file a lawsuit for $150,000 per infringed work and attorney’s fees.

To summarize, they state that.

3. On 24th Feb 2010, Zygor filed DMCA claim against all of our YouTube videos. Videos that we created ourselves 100%, even the free how to do dailies videos that we put out, refer to picture below. The alleged infringing material consist of  an Blizzard’s icon image and quest name to which probably made up less than 1% of the total image. 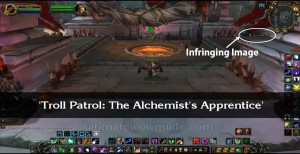 4. On 5th Mar 2010 I responded with a letter from my lawyer stating that

5. On 12th Mar 2010 Zygor’s Lawyer replied with additional demands instead.

6. We sent the follow up letter on 25th Mar 2010, stating further evidence that we were within our rights to distribute TourGuide prior 18th Feb 2010.

From the information I have,  Zygor obtain the rights to tourguide in 18th  December  (incorrectly stated as November in the screen shot below) and intentionally not notify dugiguides.com or anybody else.  So they can wait for 2 months to gain some sort of legal grounds for suing dugiguides.com  and maybe others  for 2 months worth of loss of income (refer to screenshot below)

Our current views remains that Zygor purpose of acquiring TourGuide is an intentional attempt to harm our Business and our affiliates incomes to force them to switch. Also an attempt to obtain $75,000 from dugiguides.com

I would like to comment futher however I prefer to stick to facts that I can back up with evidence.  The purpose of this post for you to know the facts and hopefully regain your confidence with dugiguides.com

I look forward to continue developing our own guides and addon and simply minding our own business.